Welcome to Spellbound Comics, Welcome to… The DeMultiverse!

The DeMultiverse consists of four separate all-new, all-different comic books written by the legendary J.M. DeMatteis (Kraven’s Last Hunt, Justice League International, Moonshadow, and hundreds more). Each of the four titles is completely different in tone and style, and each one is co-created by a different artist… 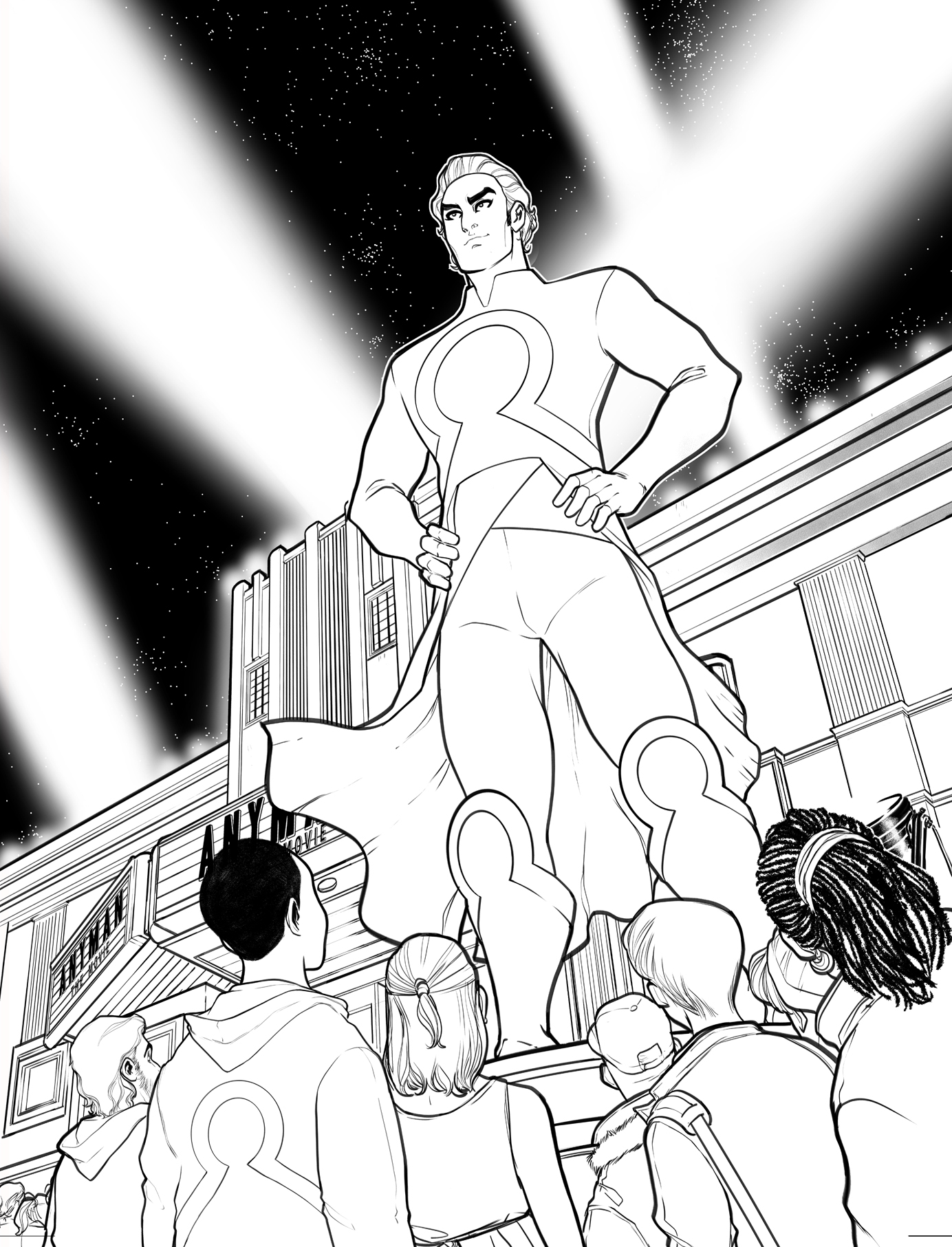 Who is Godsend? A superhero? Alien? Celestial being? 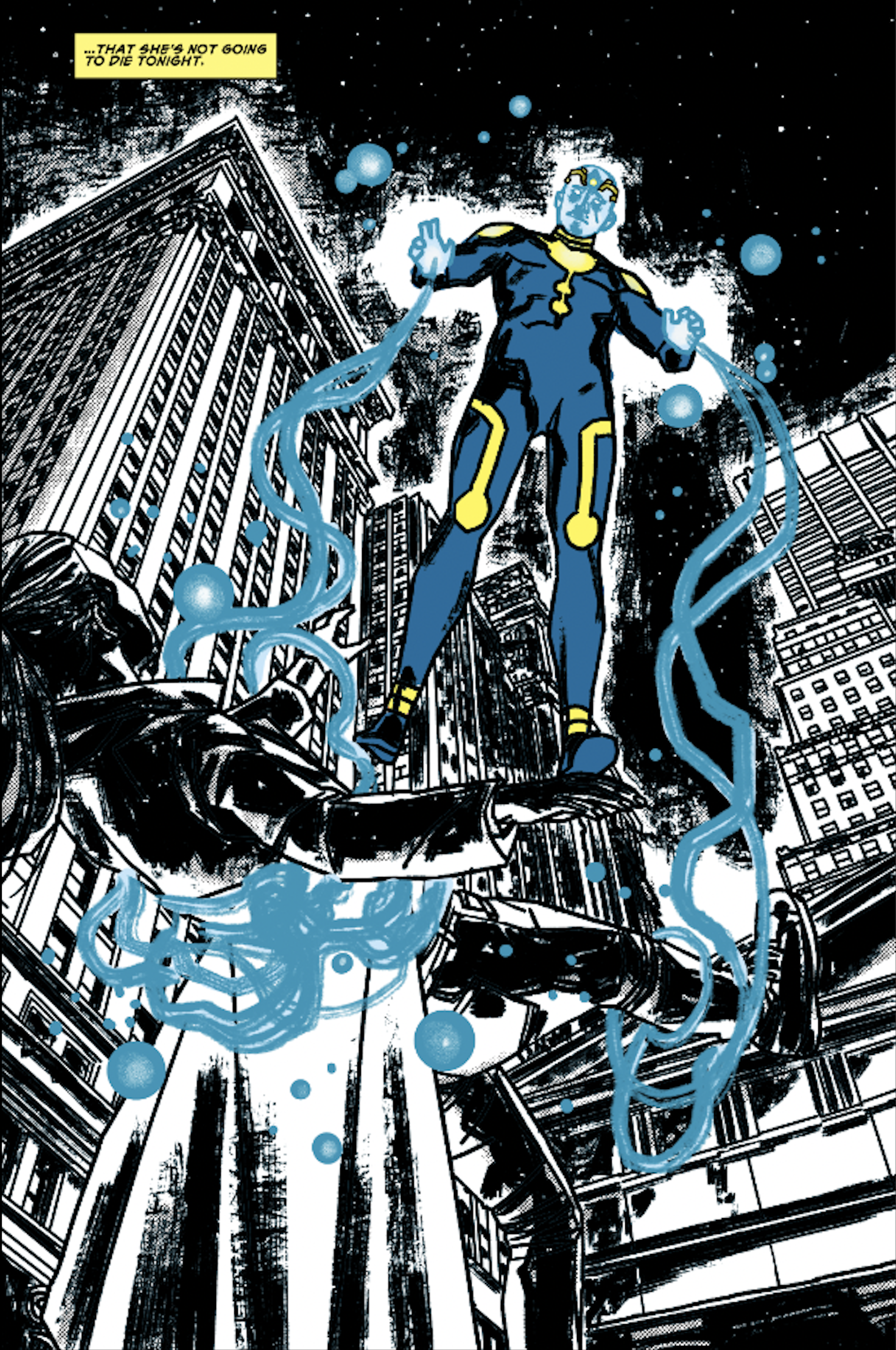 JM and artist Matthew Dow Smith will be providing answers to those questions and more in this cosmic mystery that JM himself describes as “Jack Kirby meets The Matrix meets Philip K. Dick.” 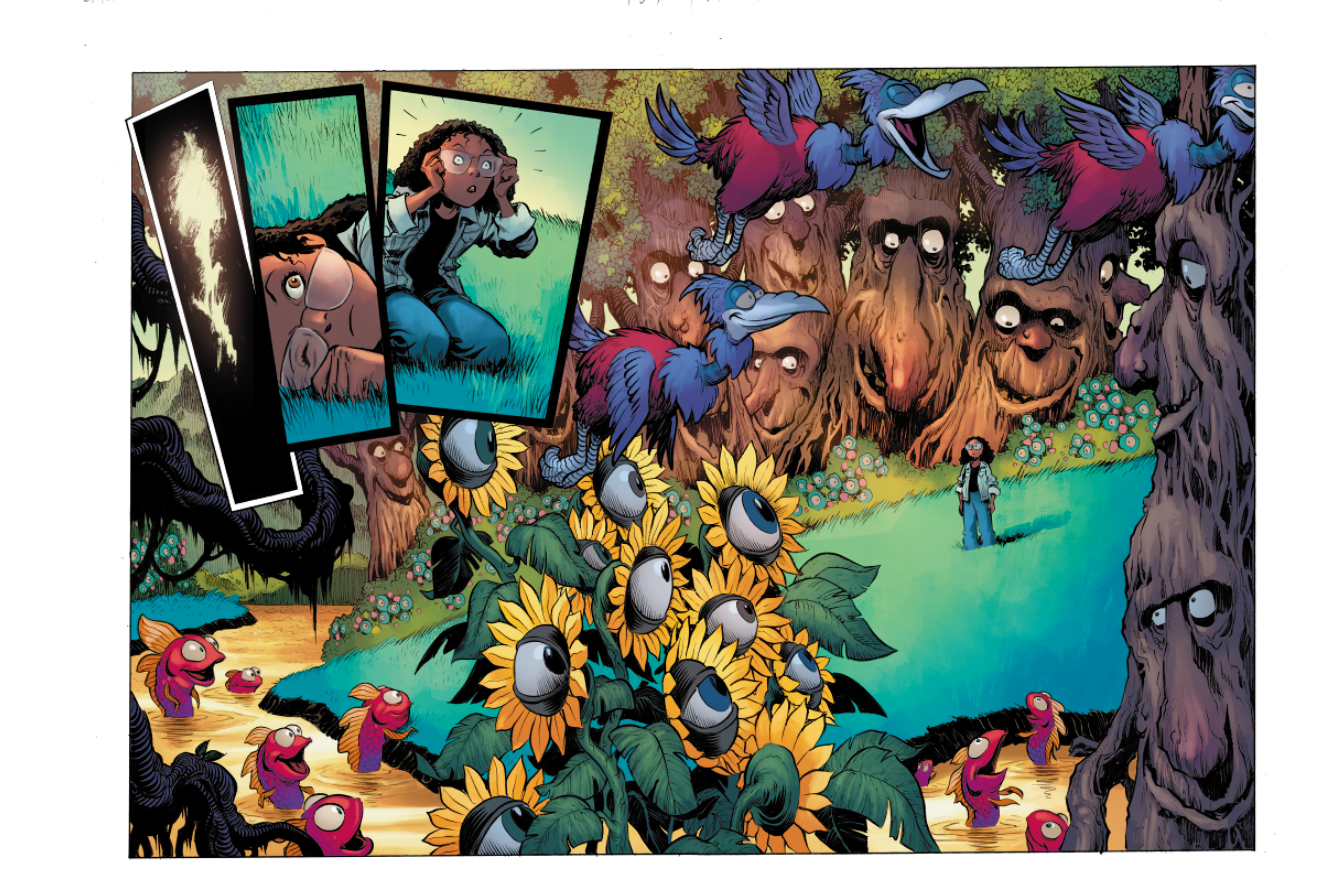 From Moonshadow to Abadazad to Imaginalis, there is no greater writer of comic book fantasy than JM DeMatteis. LAYLA is his latest Can’t Miss in this genre.

WISDOM
Brought to visual life via the haunted pen of Tom Mandrake. JM has crafted an exceptional supernatural tale of the Old West in WISDOM. 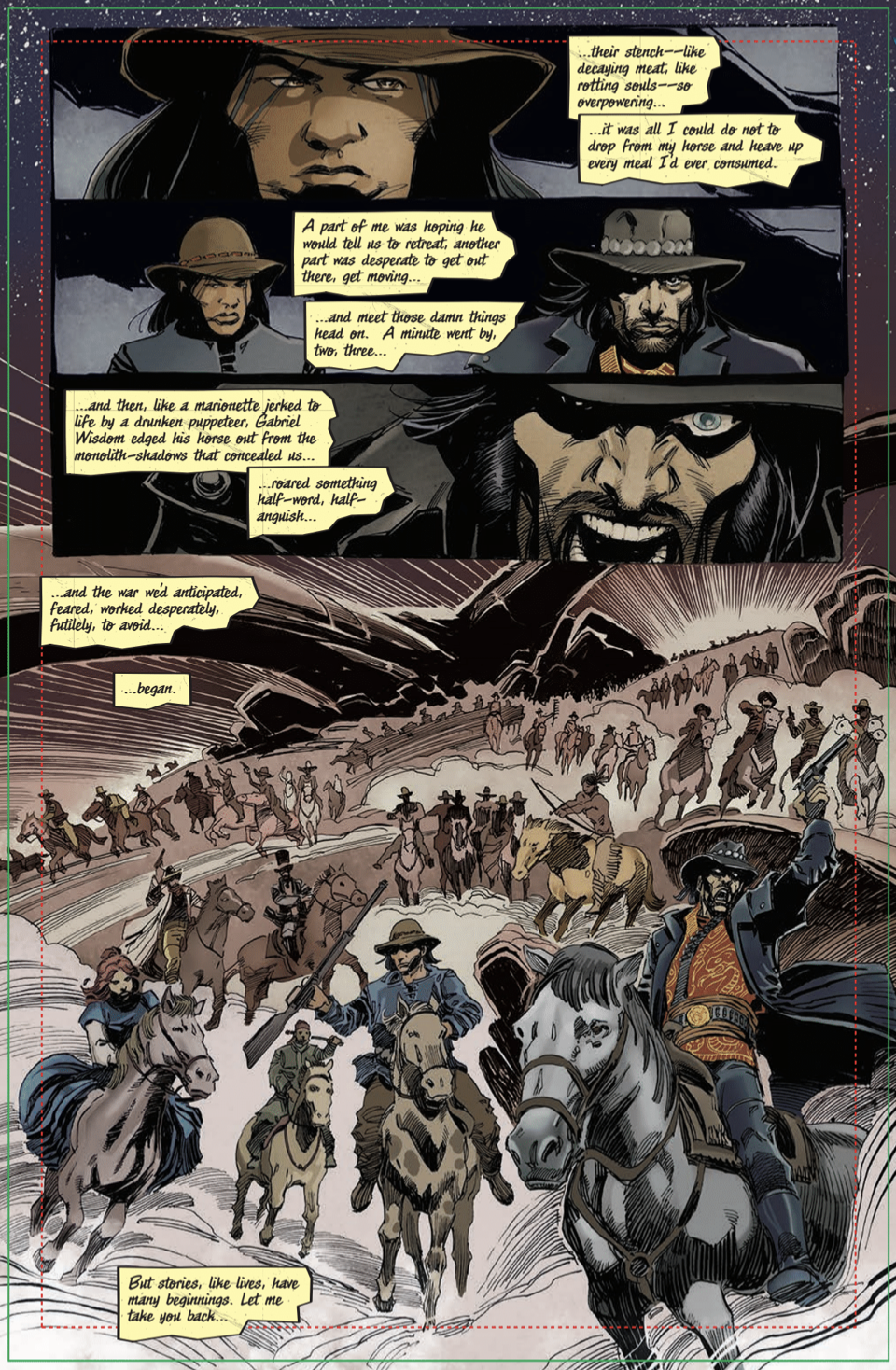 In my opinion, WISDOM has the potential to be one of the best things JM has ever written. I’m not overselling here. I’ve read the full pitch. It’s so good, it’s humbling. If, like me, you’re lukewarm on Westerns, don’t be with this one — it transcends the genre and is anything but lukewarm. More like Hell hot. (I’d show myself out now, but there’s more to say!)

All four titles will be available as single issues with a Cover A drawn by the series artist and a Cover B drawn by a special guest artist. We’re keeping some of those guest artists’ names under wraps at the moment, but I can tell you that the variant cover for LAYLA IN THE LANDS OF AFTER will be done by none other than… J.H. Williams III! Folks, I’ve seen this cover and it is, to put it mildly, a banger. If you collect J.H. art, this one is simply a Must-Own. (Side note: Do you have any idea how difficult it is to send emails to a J.H. and a J.M. without typoing?!)

We will also be collecting all four titles in one softcover trade called The DeMultiverse Collection. In addition to the four complete issue #1s, The DeMultiverse Collection will include J.M.-penned introductions to each title where he discusses the genesis of the idea, its behind-the-scenes history, and why he just had to tell this story. There will also be never-before-seen artistic goodies like character designs, unpublished panels, promotional art, and more! And finally, you’ll find a very special foreword on J.M.’s career and works by an absolute legend in the comic book industry, a person who knows J.M. as well as anyone, and that person is… a secret for now.

And now for the really cool part: the part where YOU come in.

All readers who purchase either a complete set of all four #1 issues OR The DeMultiverse Collection TPB will be eligible to vote on which of the four titles will be the first to continue on. That’s right, think of these four titles as TV Pilots and only ONE is getting greenlit to series! (For now.)

No matter how successful this initial campaign is, it would not be economically feasible for my little startup publisher to greenlight all four titles for 4-6 issues immediately (unless we slow-roll their releases to a snail’s pace). So a decision must be made! And since I, myself, have never shied away from making a tough decision, I’ve decided to force YOU to make this one!

You buy. You read. You vote. We make.

If you’re not familiar with how crowdfunding sites like Kickstarter.com and IndieGogo.com work, creators can “pre-sell” their creations before they’re, well, created. Customers (AKA backers) put their trust in the Creators by paying up front before the product is complete, then waiting however long it takes for manufacturing (in our case assembling/printing) and fulfillment before receiving it.

Fortunately, in the case of The DeMultiverse, all four comics will be 100% ready-for-printing by the end of the campaign, so we’ll just need be a little time to assemble the extras for the Trade Paperback Collection, tally up the final number of orders, and send the files to the printer. After that, the turnaround time is anyone’s guess (this being a post-pandemic world and all), BUT we expect to have these in our hands no later than Spring 2023, at which point, we will confirm shipping addresses, and get these beauties into your clamoring hands!

You can choose to back us here on SpellboundComics.com or on Kickstarter for a 30-day period starting in early October, but we hope you’ll back here and help us save fees. In case you don’t know, Kickstarter takes about 10% off the top. The costs we pay for this site are closer to 6%. With profit margins as thin as they are in comics, that extra couple of percentage points is going to mean something. And no matter which platform you support us on, please know the buying terms are exactly the same: Your purchase is paid up front, and fulfilled months later (again, our best guess is Spring 2023), and there are no cancellations after the campaign (or pre-orders) are closed.

One other thing you should know, if you’ve never backed a crowdfunded comic, is that they cost a bit more per issue than what you’re used to paying at the Local Comic Book Store. The reason for this is simple: Larger publishers distribute between 5,000 and 100,000 copies of each of their books which allows them to amortize the upfront costs (mostly salaries and overhead) over a larger number of issues than what typically sell during crowdfunding campaigns for comic books.

The truth is, we’ll be lucky if we get to 1500 backers, yet the costs of production stay the same whether we sell 20 copies or 2,000. So the end result is that each of our small batch of comics will need to bear a larger burden of those costs. As such, we completely understand if you can’t afford to support everything we’re offering, but we do hope you’ll support at least one. And I promise you this: the quality of these books is as good as, or better than, anything else on the racks today. From the writing to the art to the colors to the letters to the covers — all work was performed by topnotch, experienced professionals who, combined, have worked for every major publisher in the US (and some outside the US).

That should just about cover it. If you have a question that wasn’t answered here, pop on over to our Contact Us page (link at the top or bottom of the page), and shoot us a message.

And with that, I’ll leave you with this: The comic book industry holds a special place in my heart. It provided me with countless hours of entertainment while growing up. It inspired within me ambition and passion that I took into adulthood and the pursuit of my own writing career. And it taught me stories and history and mythology and vocabulary. My #1 aim with Spellbound is to provide all of those things to YOU (and to employ a few of my favorite professionals—heroes!—along the way).

P.S. If you're ready to buy, simply click SHOP NOW.